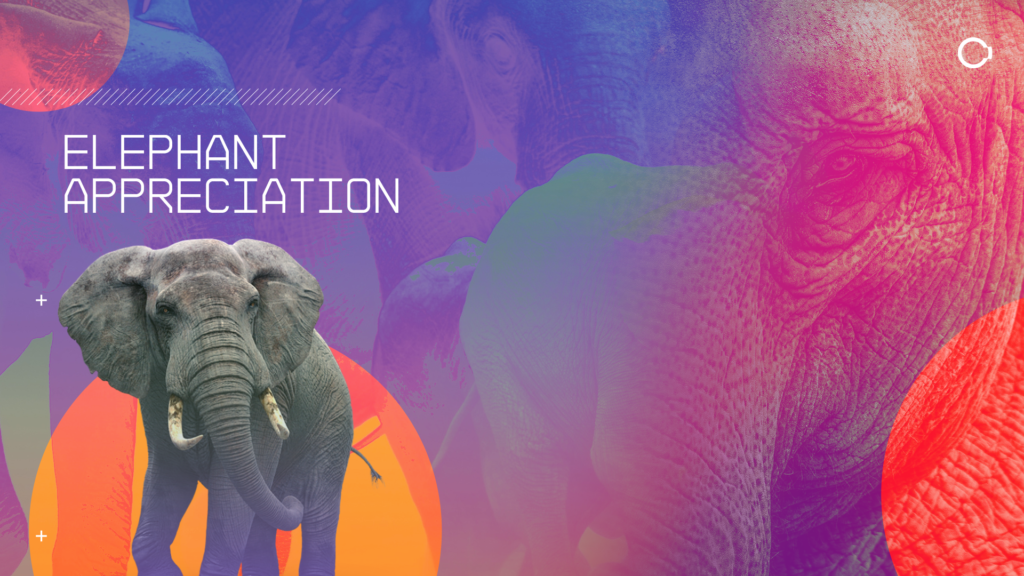 Ad Honorem: A Tribute to Proboscideans

Crown products of 55 million years of evolution across Africa and Asia, elephants epitomize an extraordinary species endowed with hyperacute senses and a deep well of intelligence and sensitivity. Astute and social, they live rich lives among complex matriarchal societies. A keystone species, they also fulfill essential ecosystem functions – yet are increasingly threatened to extinction by a cruel combination of both anthropogenic and natural factors. The time is now to understand, respect, and protect these extraordinarily beautiful and powerful creatures with all our might.

The Samburu tribes of Kenya do not consider elephants animals.

Elephants, instead, are on par with humans, “like an elder”. A magnificent 7-ton repository of ancient knowledge and wisdom deserving of the utmost respect.

Sacred in ancient African traditions and prayed to daily across Asia in the form of the elephant-headed Hindu god Ganesh, elephants have long been a source of worship, protection, and collaboration. When humans spread beyond Africa, they shared the space with elephants and 40-some other species of large  terrestrial mammals (of which only elephants, hippos and rhinos remain today). Elephants – of the taxonomic family known as Proboscideans  , which includes their extinct relatives such as the woolly mammoths – represent the end of a 55+ million-year lineage: the last of the megaherbivores who have been hugely influential in collaboratively shaping life on earth as we know it  (1).

A Whole Greater Than The Sum of Its Parts: Astonishing Anatomy

African or Asian, the elephant is a 10-foot tall amalgamation of flesh and bone fueled by up to 30 gallons of water and 300 pounds of food daily – equivalent to what an average human would eat in a month. So big are they that their skin, paper thin, would cover an 800 ft2 apartment laid out flat.

Elephants live large in more ways than one, however: They have long gestation periods (nearly 2 years) and life spans (70 years, or that of the average male human) – not unrelated to their astonishing genetic resistance to cancer. Enviably, they harbor 40 versions of the p53 gene, which, “guardian of the genome”, kills cells with damaged DNA (2), making them five times less likely to develop cancer than humans – and which could even help inform cancer treatments in humans.

Remarkably, elephants can survive up to 4 days without water, consume over 90 different species of grass and plants, and have an intuitive sense for when they lack minerals: they’ll even eat sodium-rich dirt if they’re feeling too low on salt . Their senses, meanwhile, are hyper-developed. African elephants have more genes encoding smell than any other mammal: twice as many as dogs and 5 times as many as humans.

Their best party trick, though? That iconic trunk. Harboring 40,000 muscles, trunks can fell trees, lift objects twice their size, or scoop up a peanut from the ground thanks to little flap-like projections. Trunks also reassure, express affection, and greet:  An elephant will not uncommonly place his trunk in another’s mouth when meeting for the first time (3).

Matters of The Heart and Mind

To gaze into an elephant’s eye is to be face-to-face with genius.

Between 35 million years ago and today, the size of an elephant’s brain relative to their body (also known as its encephalization quotient) increased 10 fold, and the elephant today has a near-identical nervous system to ours, governed by the same neurotransmitters that underpin mood and motivation. Not too surprisingly then, they can understand syntax, create art, recognize themselves in mirrors, problem solve with tools, and have an extraordinary memory, recalling the location of water holes throughout their entire lifetime despite complex patterns of migration.

Not only that, but elephants are that rare, elusive, and slightly enviable combination of smart and good. They feel empathy, protect non-elephant species, and mourn their dead. Elephants will gently touch the skulls and tusks of their dead, or even sometimes cover them with soil and leaves. Acutely sensitive, they even suffer from PTSD, as explains Dr. Bradshaw in Elephants on the Edge: What Animals Teach us about Humanity: “an elephant can die of grief”.

Quite uniquely individual indeed, elephants have complex emotional lives, experiencing grief, anger, jealousy, lust, and love. Ours are not the only hearts and minds on this planet, and, as explains behavioralist Menon, “the elephant is a near person”.

Gentle giants, elephants live in tight knit, caring families, paying particular attention to their youngest. Similar to humans, elephant calves are born with brains only partially programmed for instinctual survival skills. This leaves lots of leeway for some important life lessons: Elephant mothers and daughters can stay together up to 60 years, longer than any other land animal.

Socially sophisticated, an elephant herd’s matriarch remains the repository of social and ecological knowledge. She commands, guides, and leads her herd to food and water sources. At watering holes, the matriarch quite naturally swims first, followed by – with all due respect – the other members of the group in order of decreasing importance (4).

Within the herd, meanwhile, elephants are highly cooperative. They’ve even been shown experimentally to coordinate with a partner in a task requiring two individuals to simultaneously pull two ends of the same rope to obtain a reward. Not only do they act together, but they will delay the pulling response for up to 45 seconds until the arrival of a partner, understanding meanwhile that there is no point in pulling if the partner cannot access the rope. Through convergent evolution, elephants may indeed have reached a cooperative skill level similar to that of chimpanzees (5).

Navigating their complex yet cooperative fission-fusion societies (6) means that elephants have also evolved into sophisticated verbal and nonverbal communicators. With vocal cords 8 times the size of ours, they have a rich vocabulary of squeaks, rumbles and trumpets, producing up to 30-some distinct types of calls.

What’s most remarkable, however? They can sense vibrations up to 8 km away – recognizing an impending thunderstorm, tsunami, or earthquake. Seismic energy is best transmitted in the same range as an elephant rumble (10-40 Hz), and elephants are thought to detect these waves thanks to massive ossicles in their ears or mechanoreceptors in their toes, feet or trunk. One theory is that specialized receptors called Pacinian corpuscles in their feet would sense vibrations in the earth, shooting up through their bodies and making their entire skeletons vibrate.

Thirteen-foot monuments to the biophysical wonders of evolution, elephants don’t just live – they have lives.

Literally a “projecting ornament of at the intersections of ribs of ceilings” , a keystone species – such as elephants – provides vital ecosystem services. Mascots  of the African savanna, elephants are more than just a pretty face: creating, maintaining, and modifying habitats by knocking down trees, pulling up grass, ploughing trails through dense plants, and digging water holes that other animals can use – the quintessential keystone species.  Meanwhile, like their mammoth relatives, elephants spread seeds through their dung: daily, Congolese forest elephants disperse seeds from 100 different species up to a mile from parent trees.

Ecosystem engineers of the greatest caliber, elephants are the gardeners of the forest.

Ecosystem Services and The Market Cap of Elephants

Among the Kenyan Samburu tribes, elephants have traditionally worked alongside the women of the tribes, gathering firewood for their homes – but today, while nearly half the global GDP ($42 trillion) continues to depend on high-functioning biodiversity and ecosystem services (7),  elephants are natural economic powerhouses, valued at $1.75 million for the ecosystem services they provide the planet on a yearly basis (8).

“The one process now going on that will take millions of years to correct is the loss of genetic and species diversity by the destruction of natural habitats. This is the folly our descendants are least likely to forgive us.” – E.O. Wilson (1929-2021)

The Elephants In The Room: Lethal Threats

Nevertheless, one elephant is, still, tragically killed every 15 minutes.

Entire populations of wild elephants across Asia and Africa have been decimated in the last few decades by poaching and killing for the ivory trade . On top of this come environmental toxins (9), conflicts with local farmers, resource wars (10), and habitat fragmentation: As explains paleobiologist Adrian Lister, “we call it islandisation […] If you’re a population of 50 elephants on a national park in Nepal, surrounded by agricultural land, you may as well be on an oceanic island in terms of population size and genetic diversity.” Anthropogenic pressures are destroying the very fabric of elephant society.

Making matters only worse are infectious diseases, such as elephant endotheliotropic herpesviruses (EEHV), which are resulting in fatal hemorrhagic disease among young Asian elephants. Mortality rates reach up to 85% (11,12) .

Red-listed as Endangered or Critically Endangered by the International Union for the Conservation of Nature (IUCN), a harrowing 450,00 African and Asian elephants remain today (13).

And all elephants could be extinct in 30 years.

The Audacity to Hope: Elephant Conservation

Can we dare have the audacity to hope? With one of our most extraordinary keystone species under imminent threat, it is the only way, and the Scientific Enterprise is already breaking trail – with Colossal leading the charge.

First, Colossal is funding the Vertebrate Genome Project (VGP), enabling the sequencing, assembly, and annotation of the Asian, Borneo, and both African elephants’ genomes. This will ensure the preservation of these masterful genetic blueprints for future generations, all the while helping us understand them at a deep level.

Second, these sequenced genomes will be used to probe elephants’ genetic susceptibilities to EEHV. Alongside advancing vaccine and therapeutics development, this will guide the use of CRISPR genetic engineering to targetedly correct these viral susceptibility mutations  (14) – sustainably curing proboscidean populations of this devastating infectious disease.

A Strong, Healthy Future for All Proboscideans

Fourteen thousand pound testaments to the marvels of evolution indeed, benevolent stewards of ancient lands, elephants remain not only a fascinating window of insight into geological deep time, but a crucial yet vulnerable branch of the vast and colorful tree of life.

The time is now to prevent elephant extinction, preserve biodiversity, and enhance ecosystems by rewilding their native habitats, defending these beautiful creatures from infectious disease, and ensuring that all proboscideans, past, current, and future, not only survive – but thrive.